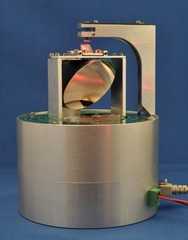 In the framework of the DLR project SELOK (Self Localisation on Planetary Surfaces) a prototype of a low power, low mass 2 dimensional LIDAR (Light Detection and Ranging) system has been developed. Target application is scanning of the surrounding area for the navigation and localization of autonomous rovers. The system features very fast aquisition times and a large angular coverage. Measurement speed can be traded against accuracy and vice versa by user command.

The SELOK instrument is an autonomous 2D LIDAR system with almost 360° angular coverage. It consists of the following components:

SELOK action thumbnailThe new SELOK instrument can be used in future space missions for navigation and localization of autonomous rovers, e.g. on the Moon or on Mars. It might be also used for rate distance measurements during docking or landing maneuvers with high update rates and accuracy even with non-cooperative targets.

This work was funded by the German Space Agency DLR under contract 50RA0912.