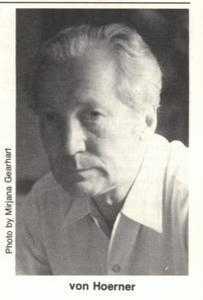 The Astrophysicist Dr. Sebastian von Hoerner was born in Goerlitz, Germany, on April 15, 1919. He received his Ph.D. degree in Physics in 1951 from the University of Göttingen with Prof. C. F. v. Weizsäcker and worked with him at the Max-Planck-Institute for Physics, Göttingen, on the formation of stars and subsequently on the dynamics of star clusters at the Astronomisches Rechen-Institut in Heidelberg with Prof. Fricke. At the University of Heidelberg he received his habilitation in 1959 with a study on the rate of starformation.

In 1962 he joined the National Radio Astronomy Observatory at Green Bank, West Virginia, USA as a staff scientist with director David Heeschen. He continued his research on problems of stellar dynamics and star formation and on problems of shock front propagation, and entered a new field of work, the technique of lunar occulations. After intensive work in cosmology and gravitational collapse phenomena, the first experiments of Frank Drake of the NRAO to listen with radiotelescopes for extraterrestrial signals, opened another large research area: SETI, the search for extraterrestrial intelligence, where he did pioneering work.

Another important subject has been his studies and developments of the structural optimization of large radio telescope dishes, resulting in his pioneering homologous antenna concept, which was used for the 100 m radiotelescope in Effelsberg, Germany, which is operating now since more than 30 years. In this area he continued his work after his retirement as independent engineering consultant. His expertise in this field is widely accepted and many scientists and engineers in the antenna field adopt the attitude “If Sebastian von Hoerner said it, then it must be true.”

Dr. S. v. Hoerner wrote more than 100 publications in scientific journals on astrophysics, construction of radiotelescopes and SETI, performed 115 technical studies on the construction of antennas and is author of 4 books. Shortly before his death, he completed the manuscript for the book about SETI, “Sind wir allein?” (Are we alone?) which will soon be edited.

He lectured as a visiting professor at Cornell, Ithaca, USA, at UCLA, Los Angeles, USA, at the Max-Planck-Institute for Radioastronomy, Bonn, Germany, at the National University of Mexico City and at the University of Basel, Switzerland.

He died from another heart attack on Tuesday 7th January, 2003 at Esslingen.